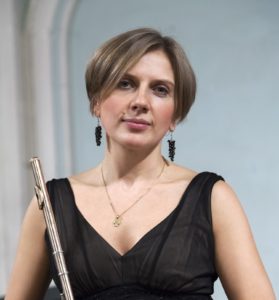 Olga Ivusheikova was born in 1971 in Moscow. At the age of five she began her musical training at Moscow Gnessin’s music college (pr. A.Korneev, pr. L. Mironovich). Then she studied at the Moscow Tchaikovsky Conservatory with Professor Yuri Dolzhikov.

Her graduation from the Conservatory launched both her performing and teaching careers. In 1997, she gained a teaching position at Moscow Tchaikovsky Conservatory where she became an associate professor in 2006.

As a soloist she plays with symphony orchestras and instrumental chamber ensembles in both cities of Russia and abroad (Germany, Austria, Holland, Great Britain, Switzerland, Italy, USA). Since 2004 Olga Ivusheikova is Soloist of Pratum Integrum – the only Russian orchestra, comprising all the groups of historical instruments.