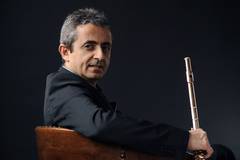 Michel Moragues entered the Conservatoire National Supérieur de Musique in Paris, in the class of Jean Pierre Rampal and Alain Marion at age 14, and two years later, in 1979, he won first prize for flute and first prize for chamber music in the class of Christian Lardé. In 1978, he won the International Competition of the Guild of Artists Soloists of Paris, then in 1981, the International Competition in Budapest.

An avid chamber musician, he is a founding member of the Quintette Moragues, which he formed in 1980 with his two brothers Pierre and Pascal and with David Walter and Patrick Vilaire, and which performs world-wide to great acclaim. Michel Moragues also has collaborated in chamber music with partners such as Barbara Hendricks, Sandrine Piau, Nora Gubbich, Shlomo Mintz, Regis Pasquier, Brigitte Engerer, Jean Claude Pennetier, Emmanuel Strosser, Alexandre Tharaud, Christoph Henkel, Anne Gastinel, Roland Pidoux, Xavier Phillips, Marc Coppey, Jerome Perno, Frédérique Cambreling, as well as the Ysaÿe Quartett and the Trio Wanderer.

His discography includes various recordings with works by Ravel, Caplet, Albert Roussel and others.

Michel Moragues was the founder and director of the festival “Music in Grésivaudan” from 1993 to 2003, and currently directs the summer festival of chamber music from Gourdon (Lot) with other members of the Moragues Quintet.